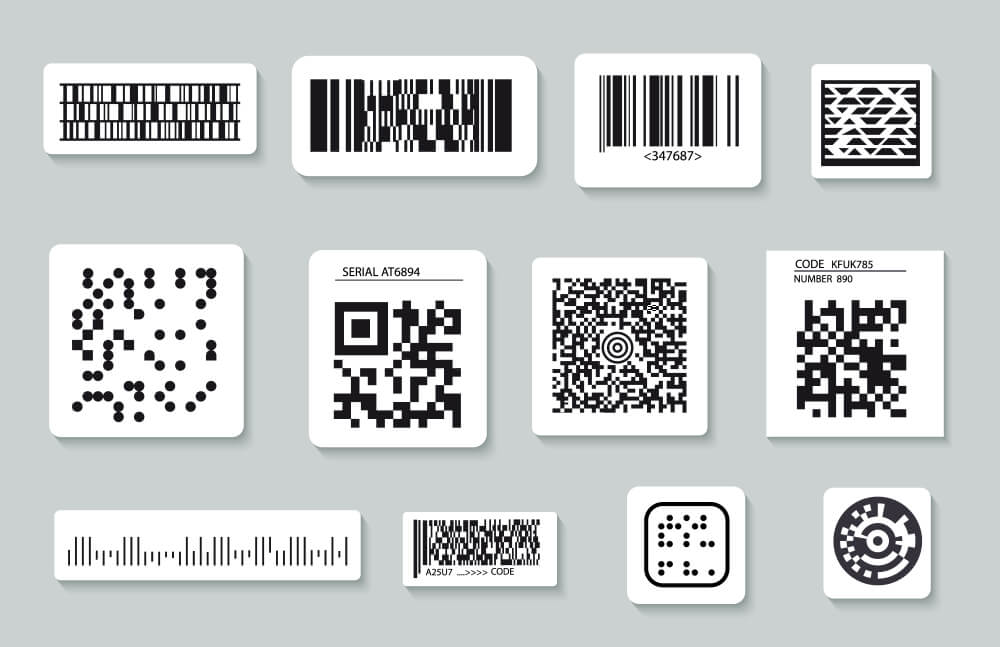 A barcode is a tiny picture of lines (bars) and spaces fastened to retail shop merchandise, identity cards, and postal mail to identify a certain product number, person, or place. The code represents numerals and other symbols with a series of vertical bars and spaces.

Now that we know the basics of barcodes, let us dive into details. There are different types of barcodes as well.

Typically, a bar code sign is composed of five components:

There are plenty of barcode types. The code is scanned using a barcode reader. The reader employs a laser beam sensitive to the reflections from the thickness and variation of the line and space. The reader converts the reflected light to digital data used immediately or stored on a computer. While barcodes and readers are most often seen in supermarkets and retail establishments, they have many other applications.

They are also used to:

Various bar code standards are symbologies that cater to certain applications, industries, or geographies. Since 1973, the Uniform Product Code (UPC), governed by the Uniform Code Council (GS1 US), an industry association, has supplied a uniform bar code accepted by most retail establishments.

One of the most commonly used barcode formats is UPC (Universal Product Code). This barcode is used for labeling retail products. It is found on almost every sale item in the market and all grocery stores in the US. It consists of a 12-digit numeric-only number.

Every product is assigned its unique number by GS1, making up the first six digits of the barcode. The product’s manufacturer assigns the next five digits. Each product has a unique UPC that its manufacturers use for identification.

Here are some commonly used barcodes:

Code 39 supports both numbers and characters. Its name derives from the fact that it was limited to encoding around 39 characters. That number has now been raised to 43. It is most often utilized in the automobile sector and by the Department of Defense of the United States.

This kind of barcode was created quite recently. It is capable of encoding all of the ASCII 128-character set’s characters. It can encode numbers, characters, and pronunciation marks, which enables a wide variety of characters. That is why it is such a versatile barcode capable of storing almost any kind of data. It is mostly utilized in logistics, transportation, and order fulfillment.

This barcode is a data carrier that was intended to make the movement of information between businesses easier. It includes a list of barcode identifiers that enables it to encode and describe the meaning of the data.

Codabar is a very simple way to print symbology. It is utilized in picture laboratories, blood banks in the United States, and FedEx airbills. It encodes up to 16 characters and can be generated manually using consecutive integers. Additionally, it is a self-checking barcode. Rather than scanning faulty data, it will flag it as a false positive, decreasing scanning mistakes.

Typically, these barcodes are used outside the United States. They are often seen on consumer goods like food, shoes, and clothing and are scanned at the point of sale. EAN-13 has 13 digits, whereas EAN-8 has 8 digits. The latter is particularly advantageous for scanning goods with limited label space, such as sweets.

This barcode is a hybrid of point-of-sale and logistic barcodes. It utilizes a 14-digit number and is capable of dealing with very tight printing tolerances. This is particularly advantageous when barcodes must be printed on cardboard. This barcode is often used for non-POS (point of sale) transactions.

The above are the commonly used barcode formatting. Now that we know about them let us know how to choose the right one.

How to Choose the Right Barcode

Choosing a barcode is not as hard as it might seem. Here are some factors you might want to consider when choosing the right barcode.

When there is just a limited amount of space available for the barcode, that cuts down your available list. Many industry standards, such as those governing UPC barcodes, limit the size of the barcode. However, making the barcode as large as possible within the available area is the most practical technique in most circumstances.

It should come as no surprise that the quality of the barcode printing has a huge impact on:

Suppose the barcode image was created on a printer with a broken printhead or wrinkled label during the application. In that case, the barcode will almost certainly not scan. Because imaging technology decodes the complete barcode, while lasers only scan over a single picture line, it is more forgiving of incorrect barcodes.

Print contrast is critical for properly scanning barcodes. How much contrast exists between the barcode’s bars or markers and the backdrop on which it is printed? Generally, barcodes are printed on white paper or synthetic material. Suppose the backdrop becomes darker as a result of aging, abrasion, or surface pollution. In that case, the ability to scan the barcodes is compromised.

What Is the Best Barcode to Use?

The most popular and easily readable barcode is Code 128. Because of numerous distinct message check routines, it also has the highest message integrity. The most prevalent barcode for retail product labeling is the UPC (Universal Product Code).

However, there are various distinct sorts of barcode standards designed for a specific purpose. These are referred to as symbologies. Each barcode type is defined by a standard that specifies the printed symbol and how it is read and decoded by a device such as a barcode scanner.

How Are Barcodes Generated?

Software/programs are used to produce barcodes. Stores choose what information (color, number, and type) they want to gather through the barcode and the format they wish to use. The program will produce a machine-readable barcode automatically.

Suppose you want to produce barcodes with your symbology and product numbers. In that case, you can do it using software, a scanner, and a label printer on your computer.

Once you have chosen one from different types of barcodes to use, you will need to include it in your packaging or bar code labels. The most versatile method of printing bar codes is to utilize a barcode font that is compatible with practically any application.